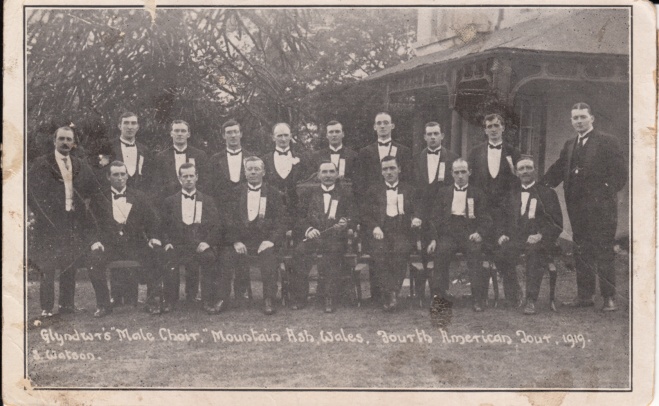 “The famous choir from the Welsh colliery town of Mountain Ash will give a concert before the King and Queen . . . at Windsor Castle tomorrow afternoon.”
(The Times of London, 17 April 1922)

The Mountain Ash choir of this period, and earlier, is well-known for its travels and for performing for the occasional head of state. All I know of them is that they maintained a level of success over several years, this coinciding with the stewardship of Glyndwr Richards. The above photo states that 1919 was the occasion of their fourth American Tour, their first, I believe, being in 1908 when they performed for President Roosevelt. On the 1919-1921 tour, they performed for President Harding.

The Times article goes on to say that most of its members were coal-miners and that the choir had formed in about 1904. Professor T. Glyndwr Richards’s stewardship of the choir is such that they are frequently referred to as Glyndwr’s Mountain Ash Male Choir. Not everyone felt that the success was deserved: a correspondent in a later Times article finds the choir in fine voice individually but lamentable as a choir, with the “worst possible arrangements”, out-of-tune singing and constant vibrato.

The tours of America were not only notable for the success of a choir from a small industrial town but led to the choir being recorded in 1909, 1920 and 1926, with a record being released in 1926. This is available on youtube thanks to a collector of old records.

I am not clear on the origins of the choir and am not well enough to go much deeper into the matter right now. I note, with amusement, a reference in the Aberdare leader of 1907 to Glyndwr Richards’s success with a choir named Resolven, the paper noting that “a large number of its singers hailed from the banks of the Cynon” and going on to say, “We can only hope that he will repeat his success next year and for many years, but with just one qualification — let the choir be called Mountain Ash.” (There is a story behind this event: rivalry, bitterness and splits, according an earlier Leader article.)

A letter to the Aberdare Leader in December 1908 provides a glimpse of the American tour of that year. Despite living in the charmingly named Altoona, Pennsylvania, the correspondent is from Mountain Ash but still receives the Leader: “I am the son of Mr. Wm. Thomas, of 86, Duffryn-street, Mountain Ash, and my wife is the daughter of Mr. Wm. Rowlands, late of Mountain Ash, but now of Glyn-neath.”

“The Mountain Ash Male Voice Party sang at the High School Auditorium on November 5th, and there was a very large audience. Their singing was ‘entrancing.’ This was the term used in the local paper. They had to repeatedly respond to loud encores.”

The Discography of American Historical Recordings shows that the choir recorded 6 songs in 1909, one of which is available for listening.

There is more that could be said about the choir, and perhaps more of the recordings could be made available for listening. Not me, though, not right now.

Given the 1926 recording of the choir, I rather like this brief footage of Mountain Ash at that time.

You tube – provided by cdbpdx

Whilst building up a list of references to the choir in US newspapers, I came across this image of each choir member published in the Salt Lake Tribune on 07 January 1912.  The quality is not marvellous, leaving the text a little difficult to read in places, but it is nice to see names attached to faces. 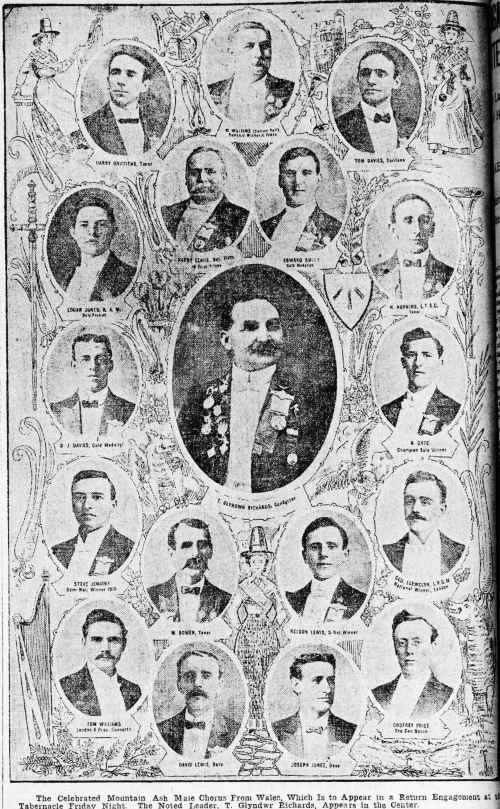 Note: I have retained the high resolution of the original image, which in context may be viewed here.

I have posted a photo of the Royal Mountain Ash Glyndwr Concert Male Choir here.

This site uses Akismet to reduce spam. Learn how your comment data is processed.