Ivor Hill: The Boy Soldier Who Went To Sea

On Friday 1 October 1915, the Cosmo Club, Mountain Ash, held an evening to honour one of its own: Private Ivor Hill. He had been invalided home following his experience with the South Wales Borderers at Gallipoli. One can only imagine the pride of his father, George Hill, when he entered the club room that evening with his son. The room had been decorated and there were fifty members present to honour the young soldier. There were toasts, songs, and a clog dance in which Herbert, Ivor’s brother, took part. Ivor’s father proposed a toast, to the “Army and Navy”, and Ivor breathed the air of regard from those older than himself. 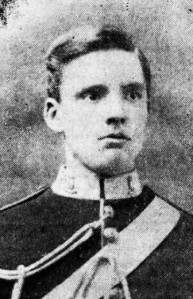 He was a showpiece at a club proud of its contribution to the war. He was also only 15 years old, having been 14 at the time of his enlistment. That he was so young seems surprising given the official minimum age of 19 for recruits to serve overseas but his story is not exceptional: estimates as to the number of “boy soldiers” in the British Army during the First World War run as high as 250,000. END_OF_DOCUMENT_TOKEN_TO_BE_REPLACED

During the First World War, the Aberdare Leader printed photos of local men, and women, who served in the armed forces. Each issue carried such photos along with details of their experiences. Focusing on Mountain Ash and Penrhiwceiber, I have collated some 130 such photos, along with as many articles as I can find relating to those named, amounting to some 23,000 words. A full index is provided via the World War One menu above, or here. As the photos below show, the quality is not good but, in conjunction with the biographical information available, I think they are of interest and value to family and local historians.